Wow! Beautiful, 4 bedroom, 2.5 bathroom Buxton Gem! Central location which sits high on the ridge is what you have been waiting for! This lovely, meticulously maintained ...

Opportunities abound at this meticulously maintained soundfront property in Buxton! Featuring a 4-bedroom, 3-full bathroom + 1 half bath main house with a private saltwa...

LET THE GOOD TIMES ROLL! ICONIC TURN-KEY ESTABLISHMENT OPERATING IN THE MIDDLE OF THE MOST DYNAMIC COMMERCIAL HALF-MILE ON HATTERAS ISLAND. "YOU CAN GET THERE FROM HERE"....

Steps from the ocean. Private pool. Double decks. Views of the light house. Four bedrooms, two of which have en suites. Multiple areas to hang out with a large open floor...

Do Not this Opportunity!! This large (60,500 sq foot) sound front and canal front lot is the perfect location to build your dream home. With tons of space for privacy, ...

This could be the site of your future dream home!! Beautiful level lot just two back from the ocean in the quiet Tower Beach subdivison of Buxton yet minutes from all the...

LIBERAL C-3 ZONING HAS OPTIONS - looking to be self-employed and live/work on site? Maybe your Hatteras paradise dream is a hyper-nice private residential property with v...

This could be the site of your future dream home!! You do NOT want to miss this absolutely gorgeous HUGE (25,500 sq foot) sound front lot in Buxton!! With tons of space ...

Buxton shares its early history with the other villages of Hatteras Island, as the location for early Native American tribes, the Croatans. The tribes thrived on fresh seafood and abundant wildlife for well over a thousand years.

As the settlers began to trickle into the area, the maritime forest of Buxton Woods was used as a source of lumber. In fact, there was even a small railway built on the island to aid in the harvesting of the lumber. The trestle bridge on the soundside island can still be seen today.

As ocean travel gained more traction, the U.S. Lifesaving Stations were established. In 1870, the Cape Hatteras Lighthouse was built and was the tallest lighthouse in the United States and the tallest brick lighthouse in the world. A first order Fresnel light was installed, ensuring safe travels for mariners for decades to come. By the late 1990s, beachfront erosion had threatened the existence of the lighthouse, which was in serious danger of being undermined by the ocean. While the lighthouse was no longer in use, it was by this point considered a National Treasure. In 1999, the lighthouse was successfully moved 2,870 feet inland to its present location — a rather startling and controversial engineering feat at the time. 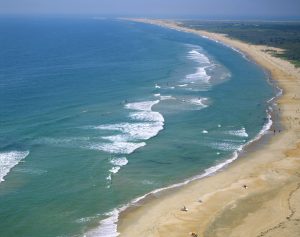 Buxton is one of the largest villages on Hatteras but still maintains its small-town seafaring charm. As of the 2010 census, there is a year-round population of 1,273. Of course, in the vacation season, the number of travelers exceeds the number of residents with over a million visitors to the lighthouse each year.

Known worldwide as a premier surfing location with some of the largest and most consistent wave action on the East Coast, Buxton is a major surfing destination. The ESA Mid-Atlantic Surfing Championships surfing tournaments are held on the island in early May at the Cape Hatteras Lighthouse.

Buxton is also an ideal site for all types of water sports on the ocean and sound side of the Island. There is the famous Canadian Hole and Kite Point for kiteboarding, windsurfing, kayaking, stand up paddleboarding, and more.

Anglers flock to “The Point” or “Cape Point” to enjoy the best surf fishing location in the world. The point is a small stretch of sand that’s located on the “tip” of Hatteras Island, and it lies inshore of where the two major North Atlantic currents meet. The species caught here are large drum, pompano, sharks, mullets, bluefish, and more, depending on the season. Located just past the lighthouse and you will know you are near when you pass the fish cleaning tables.

There are many 4WD beach access ramps for driving onto the beach. It is the recommended way to get all your gear out there, but a beach driving permit is required and can be obtained from the National Park Service office on Lighthouse Road. Each vehicle must have its own permit. Vehicles must be registered, licensed, and insured and must have a current safety inspection. Vehicles must have a low-pressure tire gauge, shovel, jack, and jack support board. Due to bird and turtle nesting seasons, some accesses may be closed. Refer to current access ramps and beach closings by visiting the National Park Service page daily beach access map.

There are miles of hiking trails in Buxton. There are trails near the lighthouse as well as trails through the heavily wooded Buxton Woods. Some of the trails can be challenging with sand dunes, marshes, ponds, and thick woods. There is no better way to appreciate nature and the coastal ecosystem.

If you crave a simple life but still want to be close to shopping, restaurants, and the common necessities, then Buxton is the place for you.